A Gourmands tour of Italy Part 3 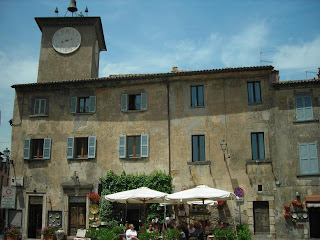 On Friday May 22 in the Year of our Lord 2009, I had the BEST SANDWICH IN THE WHOLE WIDE WORLD. I do not make this claim lightly. I recognize fully the gravity and seriousness of the statement. I took one bite, looked up at my enchanting bride and said "This may be the best sandwich I have ever had in my life." Then I took another bite and exclaimed "This IS the best sandwich that I have ever had in my life."

We took a day trip to Orvieto on the way from Florence to Rome. After a very early alarm clock we jumped on the train and headed out. A couple of hours later, and a nice walk through town it was time for lunch. After our usual "Where should we eat" debate we decided on this fine establishment. 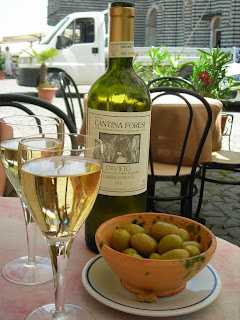 The main reason that I wanted to go to Orvieto was because of the wine. I have been a big fan of Orvieto wines for years. When I saw that it was on 'the way' to Rome I pretty much insisted we go. As soon as we sat down, we ordered a bottle of the local wine, and some olives. One of the more surprising things about Italy was the fact that we only saw olives on the menu once or twice, a big difference from Greece where olives are served with almost any meal. The olives we got with lunch were fantastic, big and just oh so slightly salty. They went great with the wine. If you have never had an Orvieto I suggest you run out right now and get a bottle at your local wine shop. Semi sweet and golden in color it is my favorite white wine. 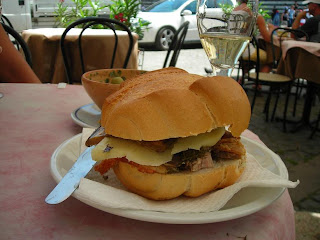 But enough about the wine (as good as it was), lets get to the real reason for the post. The sandwich itself. I'm afraid the picture really does not do it justice. Here is how it was described on the menu "Roasted Wild Boar, with roasted eggplant, formaggio, and truffle oil." Any of these ingredients would be good on their own, but this culinary masterpiece was much more than a sum of it's parts. It was a masterpiece. A work of art. As worthy of a place in the Uffizi Gallery as any Botticelli. 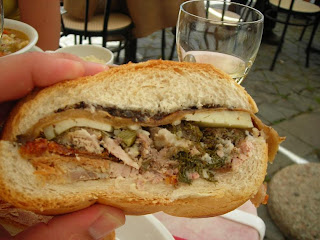 The bread was crusty and fresh, the pork sliced thickly with the crackling still on. The eggplant had a tangy marinade that made it really pop. The cheese can only be described as 'a slab of parmigiana', and the best cheese I had in Italy. And truffle oil to top it off - this is what really made the sandwich truly stellar. I have never cooked with truffle oil, but am sure to in the future.

If anyone doubts my word in this manner, book your flight to Rome, take the train to Orvieto, look for the white umbrellas on the right hand side of the main plaza, just yards from the Duomo. Order this masterpiece, this work of art...and then we'll talk.
Posted by wh1skeylover at 9:10 PM