I have lived in Richmond, Virginia for 14 years now. I have acclimated to the climate, I frequently use Y'all in everyday conversation, and have even gotten used to the archaic and wrongheaded ABC laws.* But in many ways I am a true Son of Maryland. My family has lived in Harford County since the mists of time. As a keen student of history (and of booze) I was aware that Maryland was famous for their Rye Whiskeys. Before Prohibition, most American whiskey drinkers perfered rye over bourbon. It was the whiskey of Colonial America, and when the new Federal Government put a tax on whiskey it sparked the first crisis of the young United States of America.

I have been a whiskey drinker for most of my adult life, and it would stand to reason that I would have at least tried rye in the last 15 years or so. But I never did, starting at Bourbon, then Irish, then on to Scotches...I seemed to leap over the whiskey of my ancestral homeland.

No more. This past summer, after all due consideration, I decided to take the plunge into Rye Whiskey. 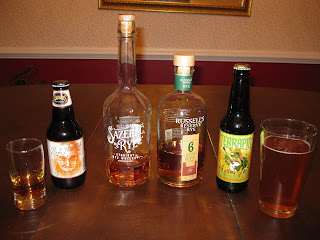 In quick succession I picked up two bottles, Russell's Reserve Rye & Sazerac Rye. Both were fantastic. If you are a whiskey drinker and have not sampled any Rye's I insist you do so immediately.

Rye is a close cousin to the more familiar Bourbon, but spicier and a little more pungent. But as the great American philosopher Sherman T. Potter once said - "Not enough OOOOOOO's in smooth".**

About the same time that I started started my love affair with Rye Whiskey, I started to see more and more Rye Pale Ales on the market. I routinely pick up two of them, the Terrapin Rye from Athens GA, and Founders Red's Rye from Grand Rapids MI. Both fine pale ales set apart from their peers by the added spiciness from the rye malt. The same spiciness that sets the Rye's like Russell's and Sazerac apart from their cousin bourbon.

So I now declare that 2010 will go down in history as the year of Rye. I will forthwith add Rye Whiskey to the spring and summer drinking season. I look forward to mint juleps made with rye, and to sipping on a rye and soda out on the porch on a hot summers night. Likewise, I hereby declare that my next batch of home brew will be a rye pale ale. I found a Terrapin clone recipe, which I intend to change up a bit, adding more rye malt and cutting back a bit on the hops, to make a spicy delicious beer I can call my own.

* Oh how I loath the state controlled ABC system, and how I look forward to the privatization of this inefficient consumer unfriendly system.
** Also a catchphrase of my beloved Father John W. Stump Sr. - Dad tells a great story about Rye. When he was but a lad in the 1930's he came down with dysentery (or some other old-timey disease of a similar nature), Things were looking pretty grim for young Grumpy when the doctor asked him if he wanted anything special, he answered "I want a drink of Maryland Rye Whiskey". That magic elixir perked him right up, speeding him to a quick recovery, so he could go on to his ultimate destiny - to sire me.